According to a newly released report by Exact Ventures, the Policy Server/PCRF market contracted 8% on a sequential basis to $200 M due largely to seasonal weakness.  The market was up 23% compared to 1Q15. 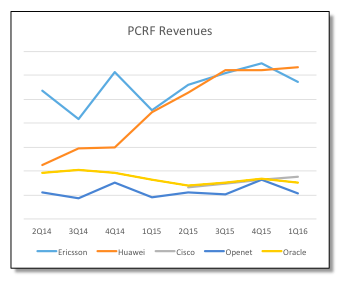 For the full-year 2015, the PCRF market grew 24% to $769 M and we forecast that market growth will slow slightly to 17% in 2016 and that the market will reach $900 million.  Service providers everywhere are continually revising and ‘one-upping’ each other regarding their data plans.  T-Mobile USA recently introduced their ‘Binge On’ video plan whereby video from over 20 popular services, like YouTube and NetFlix, streams free to certain subscribers. That is, it does not count against your data plan.  Features like ‘Binge On’ are enabled by the PCRF which informs the billing system not to charge for those bits of traffic that are identified as one of the services specified as part of the plan and/or directs that traffic to traverse the 2G/3G network, which is considerably slower than the LTE network.

In 1Q16, Huawei regained the top spot in the PCRF market by growing 41% year-over-year and accounting for 32% of the market.  Ericsson which grew its PCRF revenues 27% year-over-year and accounted for 29% of the market, up a single percentage point versus 1Q15.  Huawei continues to be very strong it its domestic market and other developing regions of Asia Pacific and EMEA where mobile data services are increasingly popular and operators are increasingly sophisticated about segmenting its targeted customers via tiered-data and sponsored data plans.  Oracle’s market share in 1Q16 was 8%, down from 10% in the the year-ago quarter.